First Meeting of the Semester!

We welcomed back mathy friends, both new and old, with some of the best icebreakers we could find. The first game involved sitting in a circle and taking turns standing up. If two people stood up at the same time, they lost (and their punishment was to reveal a fun fact about themselves :D). We then enjoyed some snacks and talked about some of the upcoming events, and finished off the meeting with a competition involving tangrams. Everyone was really excited to be back!! 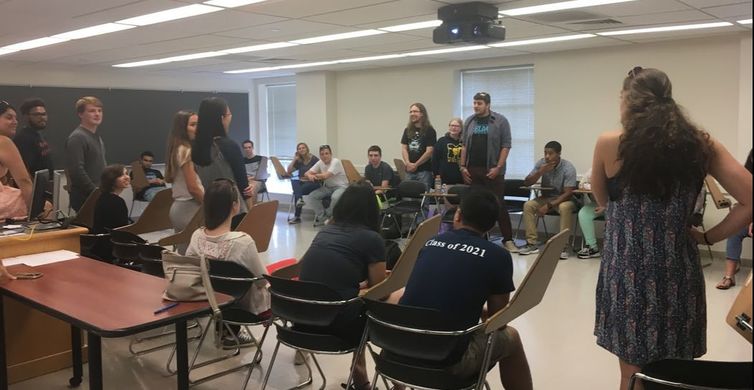 To celebrate Valentine's Day, we made origami heart boxes! Even though the video with the instructions went fast, we had fun working together and getting through the steps of making the box!
Human Knot Activity!

During our first meeting of the spring semester, we got up close and personal during our human knot activity! We started out in a circle, and everyone grabbed a hand of someone not standing next to them. Then the challenge was to untangle ourselves without breaking the chain of hands! Everyone did a great job, and afterwards we enjoyed a fun wintery snack!
Texas Hold'Em Tournament!

We had so much fun playing Texas Hold'Em at Candy Casino the previous spring, we decided to hold an exclusive Texas Hold'Em Tournament in the fall! We played a few rounds to determine our finalists, and they faced off for the ultimate prize -- a Slayer t-shirt donated by Dr. Russell! Of course, Dr. Russell beat all of us, but he was kind enough to give the shirt to the second-place winners, Ethan and Evan!
Special thanks to Dr. Russell for all of his support and guidance :) 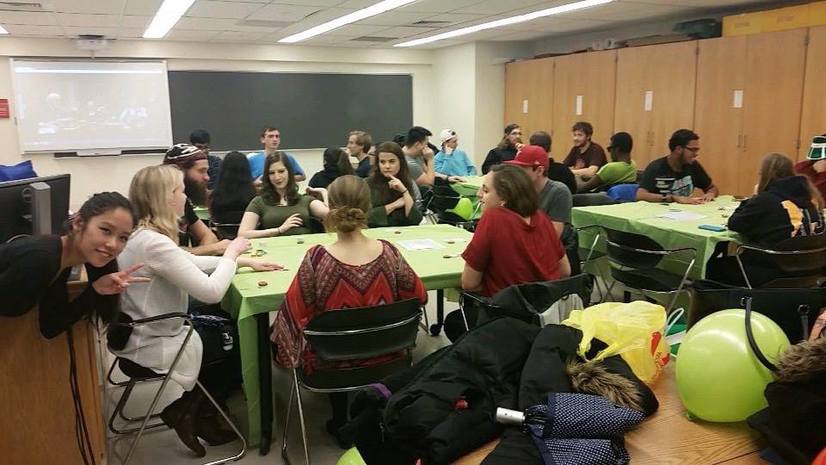 Who doesn't love Family Feud? We played our own version -- Mathlete Matchup -- with five students against five professors! The student team took home the prize this year. 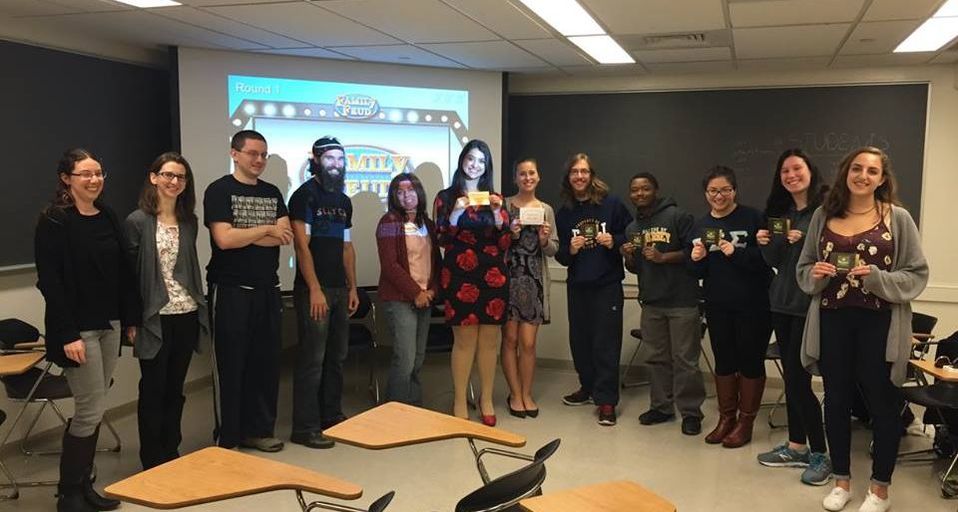 TCNJ Alums Kristen Konopi and Rebecca Shaber, who work as actuaries for Aon Hewitt, returned to TCNJ to hold an informational session for current students interested in internships and future careers with the company. 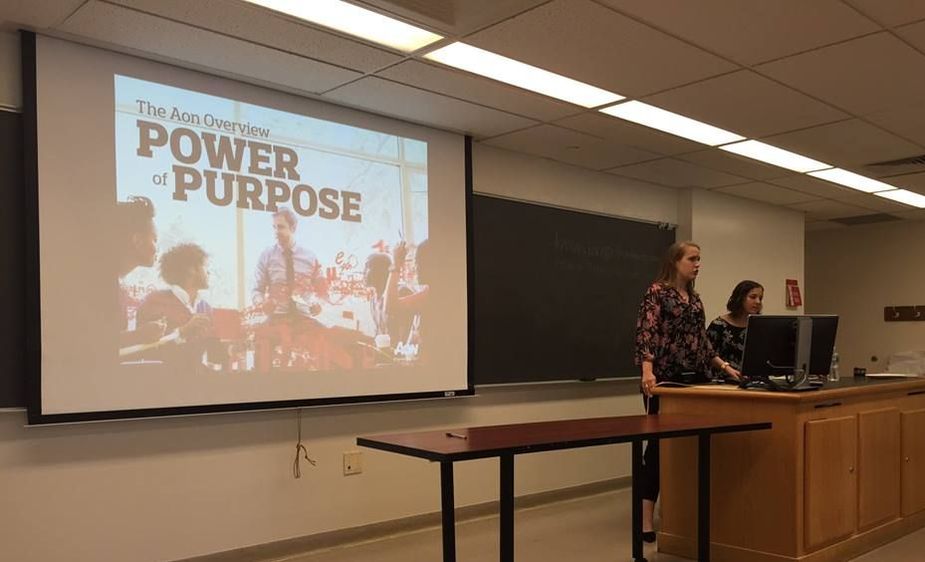 If there's one thing we love more than math, it's frozen yogurt, so we all paid a visit to the Redberry in Campus Town one evening. We were having so much fun, some friends at the next table over joined us :)
Scavenger Hunt!

For our second meeting of the semester, we sent our members on a scavenger hunt around the department! We took lots of selfies with our faculty and staff :) Special thanks to everyone who complied with our incessant requests for selfies!

What better way to spend an evening than enjoying some candy, mocktails, and friendly competition while playing Texas Hold'em, Roulette, and Blackjack?
Department Spring Picnic

To celebrate the end of the semester, Math and Stat Club joined forces with CSTM and Pi Mu Epsilon to put together a picnic for everyone to enjoy! We had a potluck lunch, played some lawn games, and jammed out! We also held a raffle and announced the winners of the 2016 Distinguished Teaching Award. 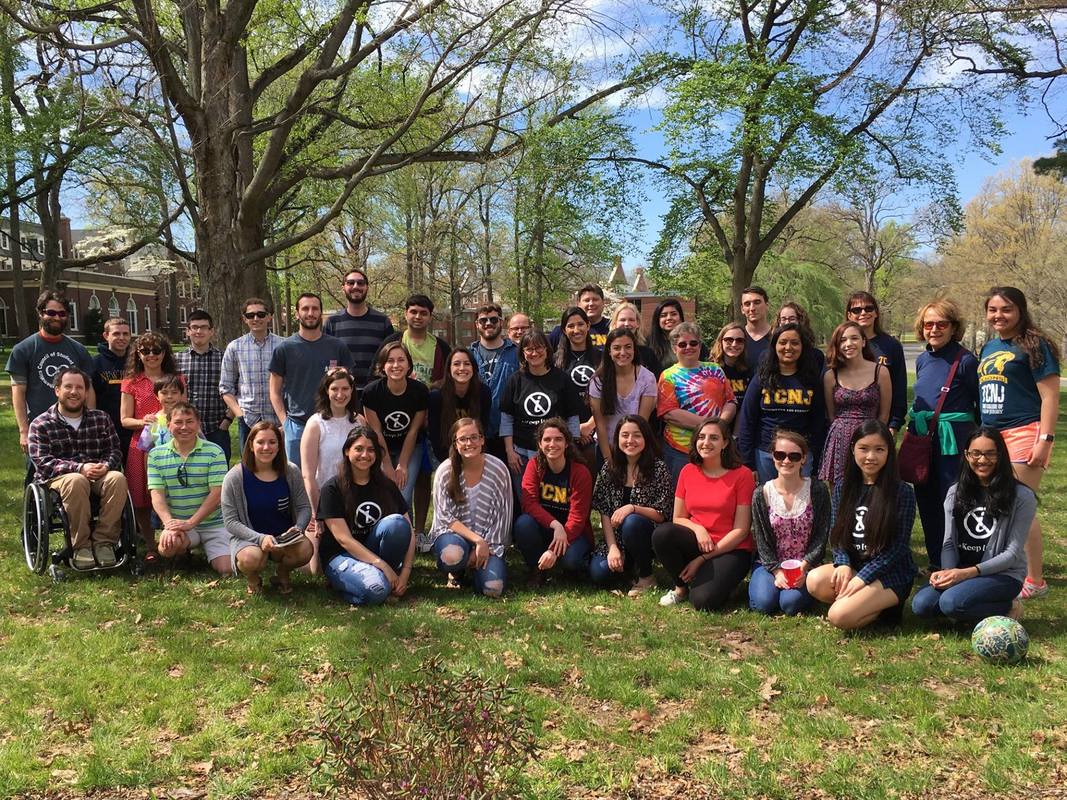 Six of our Math and Stat department graduates -- teachers Kelly, Kristen, and Evan, professor Dr. Russell, and actuaries Ellen and Kevin -- returned to TCNJ to tell us about their post-graduation endeavors and give us some advice on choosing a career and transitioning to the workplace. 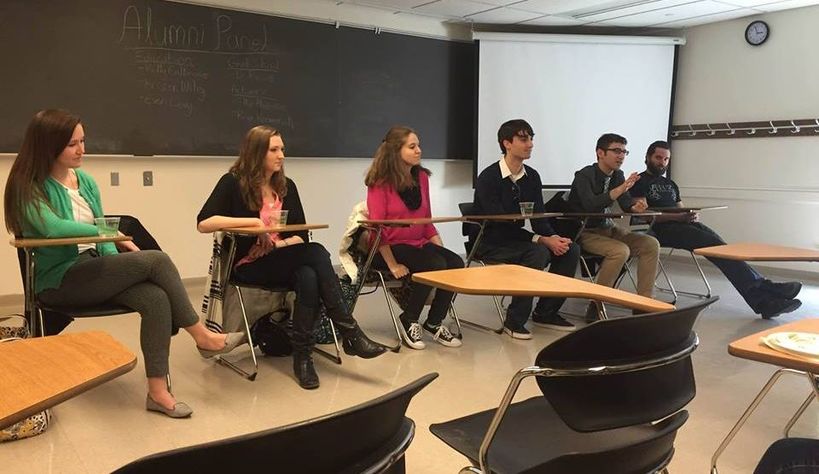 In everybody's favorite Jeopardy-style game show, the four class years each join forces with a professor and face off to test their knowledge of math trivia, department fun facts, and pop culture references, as well as show off their acting and drawing skills with charades and pictionary! This year, the seniors (class of 2016) and Dr. Hagedorn of team Derive Five took home the ultimate prize -- Redberry frozen yogurt gift cards! :)
Movie Night!

Is there a better math movie out there than Good Will Hunting? We got together on a rainy evening to enjoy some popcorn and hot chocolate while watching the legendary Robin Williams and newcomers Matt Damon and Ben Affleck.
MoMath Trip!

When we heard about the National Museum of Mathematics in NYC, we were so excited to take a trip there together! We had so much fun exploring and playing with all the cool exhibits!

To commemorate our last meeting for the spring 2015 semester, we wanted to have some fun in the beautiful weather, so Rose donated the 21 stuffed cats from her 21st birthday and hid them outside, around the science complex fountain. Once the teams found all the cats (and showed Rose the pictures to prove it), they were given the pieces to a puzzle to solve. To commemorate the event, Rose let us adopt some of her cats, and the rest found a new home in our department office! 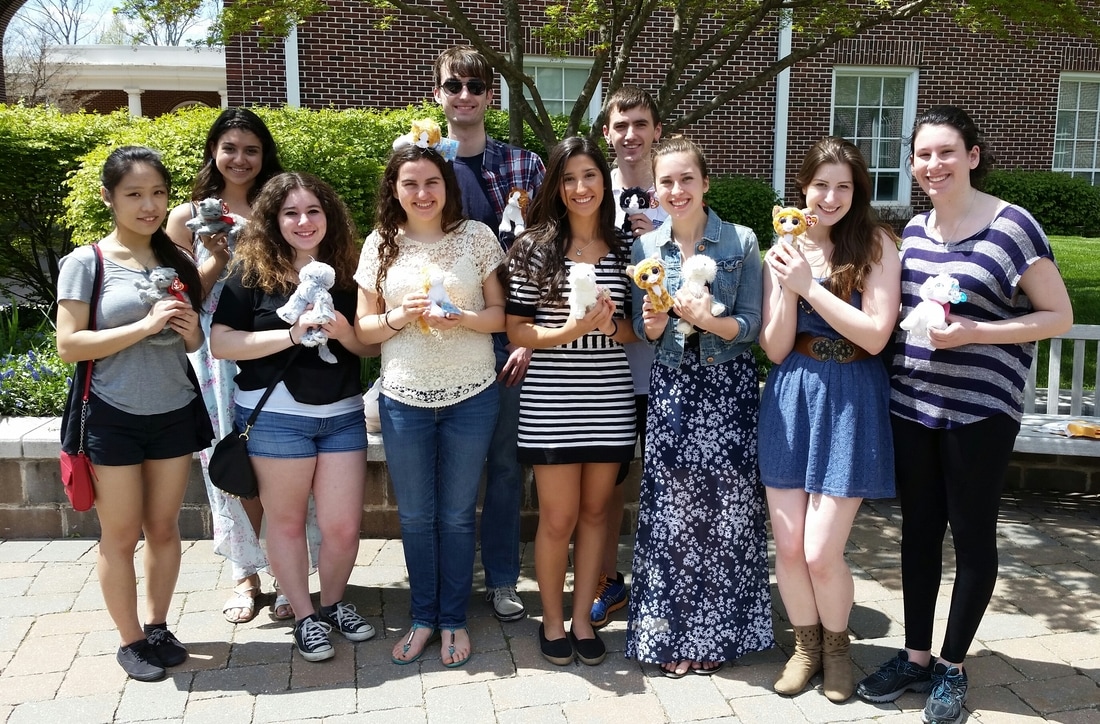 Posing with our new furry friends :)

For the longest time, Math and Stat Club wanted to start an annual integration competition because who doesn't love to integrate? Well in the Spring of 2013 the dream came true. 8 contestants squared off in a true test of their integration knowledge and speed, but in the end only one could walk away "The Grand Integrator of TCNJ"! This year a young man who went by the name "Anything" walked away with the honors! 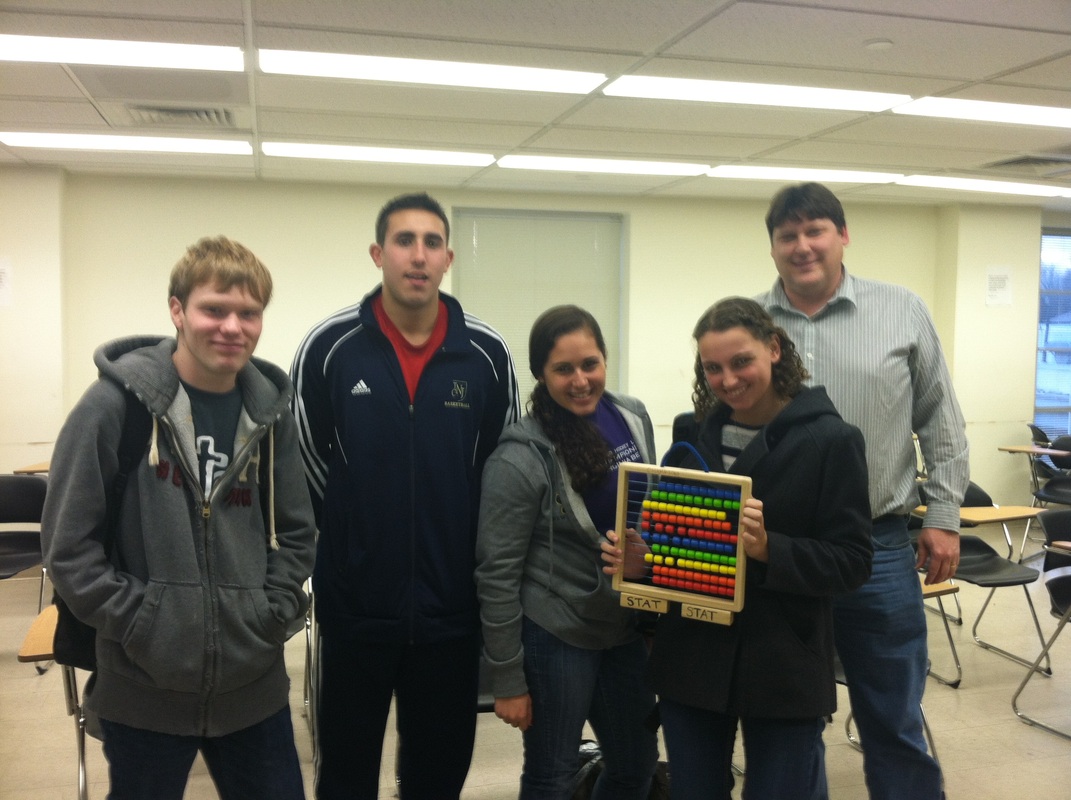 In an intense game of Jeopardy-style trivia mixed with Pictionary and Charades, four teams competed to be the first winners of Cramium! This year, the Seniors and Dr. Hagedorn barely surpassed the Juniors and Dr. Kardos to win the coveted Cramium! Abacus Trophy. 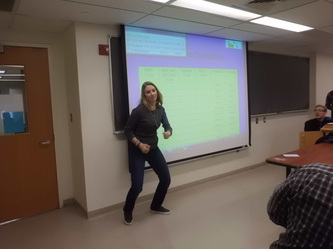 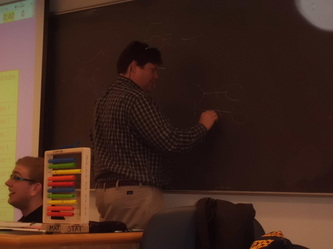 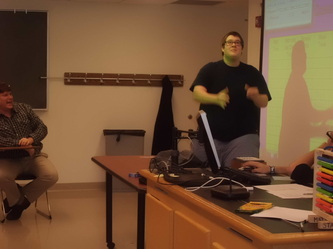 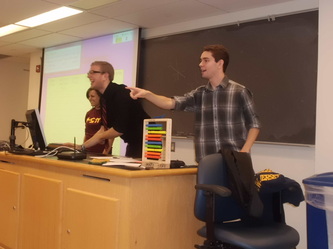 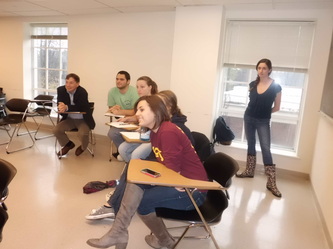 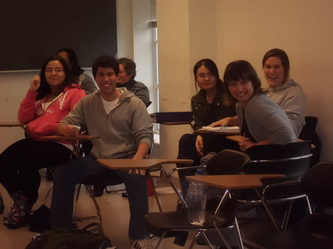 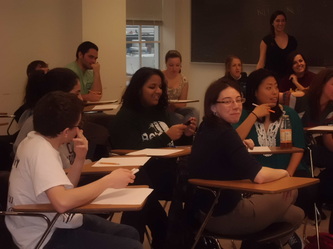 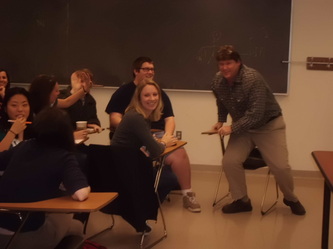 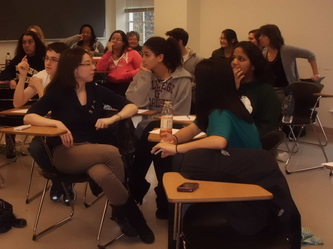 A fun, leisurely trip to Princeton to enjoy some high quality gelato! 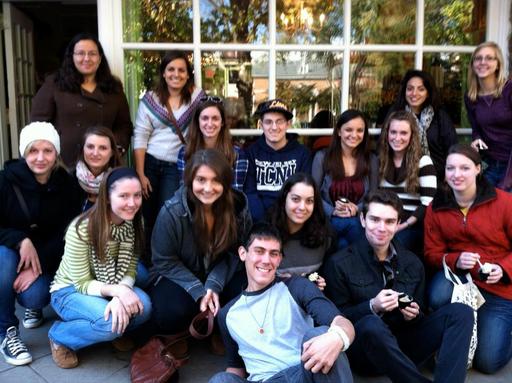 The Axioms of Sabermetrics 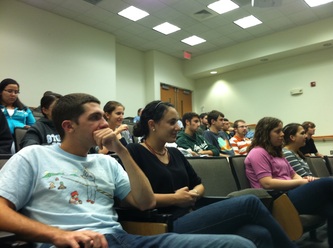 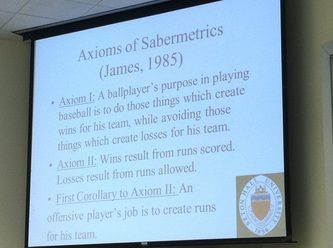 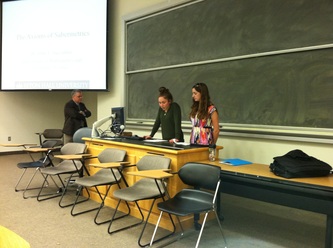